You may see lots of Scowling Scrooges and Sourpuss Santas this season, but you’ll see Smiling Angels all around Boston, 82 of them, who invested in Incentive Targeting, acquired by Google yesterday.

“It has been a hard-working, but a wonderful ride” says one of our private sources. “This evening, after the official closing, our “family” had a celebration and many of the 82 investors joined the party. Yes, you got that right – 82! I just came back. The investors are happy as can be -- what a better way to end a year than having a story to share at upcoming cocktail parties about how their investment was not only above the average, but also was bought by Google!”

Incentive Targeting, as a large 100% angel deal, may well prove to be a milestone event both locally and nationally. “This is great for the angel ecosystem in town: it is a shot in the arm to have Google validate one of our smaller companies and it is liquidity for 82 angels who will plow that money right back into local companies to fund innovation and create jobs. Exits like this are exactly what aspiring ecosystems crave - Boston is established, but needs these exits to stay strong,” says Christopher Mirabile, Managing Director of Launchpad Venture Group.

The amount of angel money invested in this company was $6.2 million, with Launchpad at $1.3 million and Hub Angels at $600k.  Angels also contributed effort and advice. “Launchpad member Bob Gervis was on the board and was absolutely instrumental in helping the company get the deal done and in helping them to raise the two bridge rounds necessary to fund them through the deal,” says Mirabile. Paul Silva of River Valley coordinated the second tranche of the A round.  Launchpad led the A2 round.

“This company raised a sizable amount of capital over more than three years, all from angel investors.  To me, this shows the power angel investors can have by syndication and cooperation,” says Gervis. “In addition, I believe that the fact that Incentive Targeting raised all of its capital from angel investors facilitated the company's ability to achieve a successful exit.  The reason is that by relying exclusively upon angel financing, the company was able to manage its valuation during each financing round in such a way as to broaden the range of acceptable exits.  While the terms of this transaction have not been disclosed, I believe that all parties are pleased with this outcome.”

Syndication proves successful
For angels, this was an absolutely massive syndication measured both by number of investors participating and by the amount of money raised.  Its origins lie back a decade or so; back before there was either a national Angel Capital Association or a regional angel syndication group (we call these our quarterly New England ACA Regional Summits). James Geshwiler of the Common Angels had invited a number of us to meet together to discuss common problems.  Present were Ham Lord (Launchpad) and myself (eCoast Angels).  There were others present, but I’ll have to refresh my memory. The ACA was formed in January, 2004 and we all became charter members.

Our first syndication meeting was in 1975. But, as we all know,   it can be a long slow journey from investment to exit. “Incentive Targeting is an early example of New England angel groups pioneering the formation of large angel syndicates.  We were the first region in the country to really do this well and it is a credit to our strong ecosystem and the tight, cooperative and friendly relations between all the groups in the northeast,” says Christopher Mirabile.

"Launchpad is incredibly proud to have been part of such a large and successful investor syndicate and for the opportunity to assist Josh, Win and Ben on the board as they built this terrific outcome. It is a credit to the angel community in the northeast as well as its fantastic entrepreneurs that we have this to celebrate. Congratulations to all," says Mirabile.

“We didn’t reach this milestone alone. From day one, we have relied on the support and commitment of our retailers, brands, investors, partners, and advisors, as well as the hard work and dedication of our team. We could not have done this without them, and as we look ahead, we are thrilled to be part of Google!”  - Ben Sprecher, Josh Herzig-Marx, Win Burke, and the entire Incentive Targeting team. 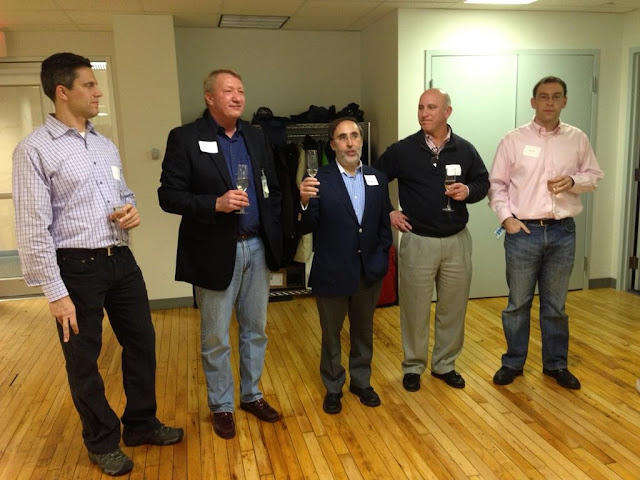 Tuesday Night: the deal is signed and now comes the toast.  From Left to Right are Nick Pappas of MassVentures, Win Burke, CEO, Robert Gervis, Launchpad board rep, David Verrill, Hub Board rep, and Ben Sprecher, one of two key founders (Josh Herzig-Marx, the other founder, is not pictured). Photo by Christopher Mirabile.