The Angel Resource Institute (ARI), Silicon Valley Bank (SVB) and CB Insights release the Q1 2013 Halo Report today, a national survey of angel group investment activity, which finds round sizes are trending up to a median of $680K per deal, pre-money valuations remain stable at $2.5 million, and most angel investment happens in angel groups’ home states.

US angel investment continues to be dispersed nationwide, and in the first quarter entrepreneurs in the Southwest region of the country received a slightly larger share of dollars than startups in California, for the first time.  The sectors getting funding remain concentrated in Internet, healthcare and mobile, with 72% of completed Q1 deals in these categories.

“The market for angel investing is solid: pre-money valuations are stable, round sizes are trending up, and market activity is spread widely throughout the U.S.,” said Rob Wiltbank, Vice Chairman of Research, Angel Resource Institute.  “The key trends over the last few years have been syndication and broader geographic distribution of investment; both of which suggest that attractive new ventures are finding places to start all over the country. ” (Editor's Note: syndication in the Halo Report refers to  cases where there is at least one angel group plus at least one other investor or investment group in a given deal.)

Round Sizes
Median angel round sizes reached another five quarter high at $680K in Q1 2013 up from $550K a year ago and $650K last quarter. When angel groups co-invest with other types of investors, the median round size is higher at $1.5M. Seventy-five percent of angel deals are syndicated.

Geography
Angel group investment deals are more evenly distributed across the US than in years past. Seventy-three percent of angel group deals are now done outside California and New England, although 30% of dollars are invested in these regions. The Southwest region edged out California for the first time, with 18.1% share of angel group dollars. Year over year, companies in the Great Plains region and New York saw the largest increase in angel group deals. Declines of equal proportion are in New England and the Southeast over the same time period.

The Halo Report includes aggregate analysis of investment activity by angels and angel groups and highlights trends in round sizes, location and industry preferences. The data is collected via survey and aggregation of public data using CB Insights innovative data analyses. The Q1 2013 Halo Report data is based on 207 deals totaling $222 million dollars invested.  The transaction details are available in the CB Insights subscription database for users to review and analyze themselves.  Academics may also access some of the data through ARI.

The Angel Resource Institute (ARI) is a charitable organization devoted to education, mentoring and research in the field of angel investing, a growing driver of our entrepreneurial economy. ARI was founded by the Ewing Marion Kauffman Foundation. The programs of ARI include educational workshops and seminars, research projects and reports, and information about angel investing for the general public. ARI is affiliated with the Angel Capital Association, the professional association of angel groups in North America.

CBInsights is a National Science Foundation-backed data-as-a-service firm that collects information on private companies and their investors and acquirers.  CB Insights data and technology is used by firms to make better marketing, procurement, lending, acquisition and equity investment decisions and to gather data-driven market and competitive intelligence.  The firm's data is regularly cited by leading media publications including the New York Times, Forbes, Bloomberg BusinessWeek and Fast Company among others. 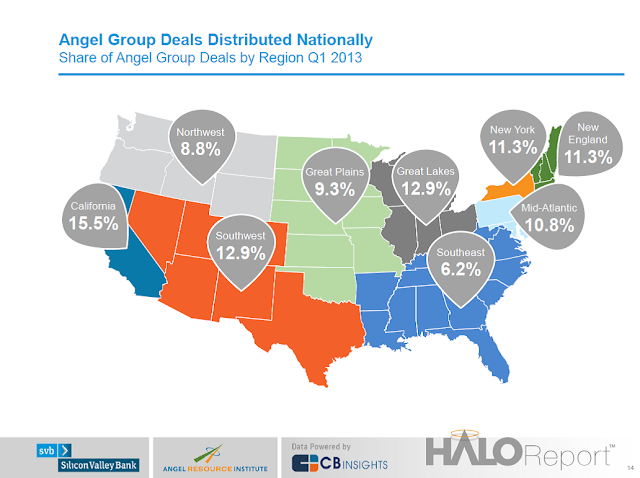 Subscribe to the Angel Investing News
Posted by George at 9:02 PM