The "Series A Crunch" at a glance 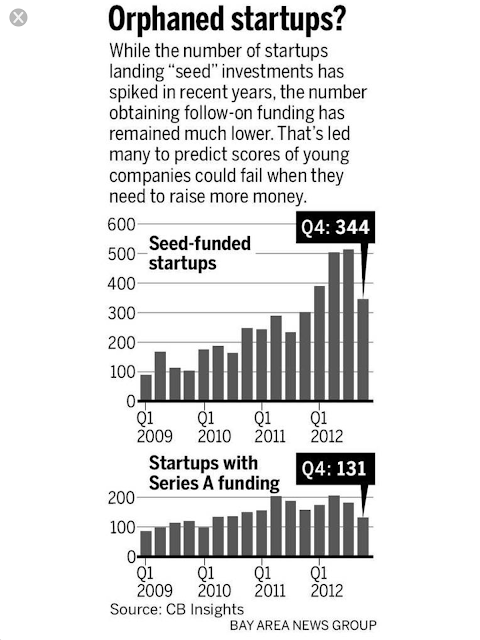 The term “series A crunch” has been moving eastward from California, like valley girl speech, “ya know.”

The table above appeared on the front page of yesterday’s San Jose Mercury News, signifying that the “crunch,” the fiscal cliff of our innovation economy, is ascending from tweet and blog status into the mainstream.  The entire infomercial is titled “ 'A-Round crunch' worries Silicon Valley startups looking for funding to grow beyond seedstage.” You can probably guess the contents.

The News fails to grasp that the seat of investment power has shifted and that today the angel community contributes more funding and support to entrepreneurs than venture capitalists.  Putting on my analog hat (the one with the propeller on top), I read from the chart that, in the first six months of 2012, 900 new enterprises received seed funding while only 380 received a series A round.  The numbers from my favorite source, the Center for Venture Research at UNH, show that in that same time frame, 27,280 ventures received $9.2 billion in funding from 131,145 individuals; these numbers had all increased over the previous year. If you redraw the chart using these numbers you will fear much less the “class A crunch.”

Feeling feisty today, I wrote to the author of this article, Peter Delevett, complaining that he should have also interviewed a spokesman from the angel community.  He replied that he had interviewed Naval Ravikant, the founder of AngelList. Not knowing Ravikant, I was previously unaware of his truly stellar angel qualifications. "Companies that assume the next round after seed is a $5 million 'A round' are poorly positioned," Ravikant said. But because it costs less to grow a tech company than in years past, thanks in part to the ability to "lease" rather than build key infrastructure like data centers, Ravikant said the traditional boundaries of seed and A rounds are shrinking.

Well said, but I think the article would have been better if Delevett had also included a spokesman from the Band of Angels, the Tech Coast Angels, or a similar group that is active in the Angel Capital Assn.

As for the VCs, before Chris O’Brien left the News for the LA Times, he wrote an article “Venture capital: Is this a down cycle or a death spiral for the industry that fuels Silicon Valley?”  Once again, you can guess the rest.