Sarah Dickey, Research Director of the Angel Resource Institute, prepared the following summary of the Q3 2012 Halo Report for us.
The most active angel groups for Q3 2012 were:

The report is summarized in an infographic available here that is well worth a look. We have produced a very brief example at the end of this post.  The entire Halo Report describing angel group investment trends is posted here.

Launchpad Once Again.
January being unleashed upon us, we leapfrogged over Halo and asked Launchpad Venture Group Managing Director Christopher Mirabile to summarize the year for us.

“We haven't formally tallied our Q4, but we expect to be just a pinch north of $5M for the year and to come in at 23-25 deals - 10 new, 13-15 follow-on.   But aside from doing deals, one of the other things we think is notable about Launchpad is the activity level of the members - last year 89% of our members wrote checks - 226 checks in total.  That is a very high participation level by angel group standards.  We are heads down working hard to make entrepreneurs successful - the rest follows.  But, sure, we're pleased to get some recognition in HALO for our efforts.”

If you are interested in previous Launchpad results, here are two posts describing 2011 and the first two quarters of 2012.

The Halo Report
The Halo report is a a joint effort by the Angel Resource Institute, Silicon Valley Bank and CB Insights, to raise awareness of early stage investment activities by angel groups. Presently, over 150 groups are included in the analysis. “The report is currently just based on investments by angel groups & co-investors in US companies; the goal is to include Canada, but we haven’t started that yet,” says Dickey. 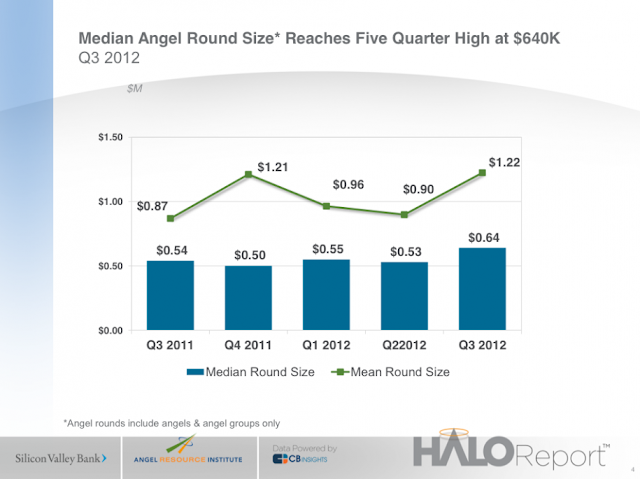