Angels Take the Field! Did the 1918 World Series Create Our Angel Groups?

In Q2, 2013, New England Angels edged out California in the total dollars invested during the quarter, with the Launchpad Venture Group  remaining a perennial top performer.

So naturally, it is the St. Louis Cardinals vs. the Boston Red Sox in this year's  World Series.

It’s time to warm up. Angels take the field, entrepreneurs to the bullpen, while I retell the tale of how we  became “Angels.”

Back in the mid-1970s, at the University of New Hampshire, Bill (Prof. William) Wetzel was researching how new companies raised startup funds.  His studies uncovered a new class of investor:  high net worth self-made individuals who were willing to take greater risks or accept lesser returns than others. More importantly, these investors provided more than money; they provided the benefit of their experience, which was often of more value than the amount of money they could invest.  A typical investor would develop a portfolio of four or five companies, typically located within a day’s drive of his home.

But what to call these patrons?  It occurred to Wetzel that these investors had much in common with the legendary “angels” of Broadway, who supported young artists out of a sincere interest in promoting the careers of talented people.

Thus Wetzel began to call his business investors “angels.”  “We didn’t originate the term, we stole it from Broadway,” he says.  Then along came Inc. Magazine, where the term first appeared in print in an article, “The Truth about Angels, More Than a Myth.”  Thus did we become angels, are angels, and most likely will be called angels in the future, as the term becomes even more institutionalized  in the names of many angel groups and in internationally recognized  trade groups, such as our Angel Capital Association.

Epilog: How art thou fallen from heaven, O Lucifer, son of the morning! Isaiah 14:12

Most Broadway angels have faded from memory, but here in the Northeast the fame, or rather notoriety, of one particular super-angel may serve us as a cautionary tale.

Handsome Harry Frazee, a well-known Broadway angel, added the Boston Red Sox to his portfolio in 1916. The team, which won the World Series in 1918, was stocked with great players, including a young pitcher/hitter named Babe Ruth.

With money from the Ruth sale, Frazee backed several Broadway plays, one of which, when rewritten as a musical comedy, became “No No Nanette,” the biggest hit of the era. Once again Frazee was wealthy, but in the minds of my parents and grandparents generation, he became the most despised man in Boston history. RIP Harry Frazee, reputed drunkard and letcher (we said they didn't like him).


So what Had Frazee become? He had bought a great team, sold off the assets, destroyed the hopes of millions of fans young and old, while enriching only himself. Had he passed in rapid succession through angel investing into venture capital and straight on to private equity? They say that just because a vegetarian starts eating meat doesn’t mean he has to go all the way to cannibalism.   All we know for certain is that from 1920 onwards, Harry Frazee was most assuredly   Ruth-Less.


The Red Sox didn’t win another World Series for 86 years, a drought often called “The Curse of the Bambino.”  They also haven’t won another world series at home since 1918, although they have two chances to do so starting tonight.


Epilogue.  For the first time in 95 years, the Boston Red Sox won the World Series at home, defeating the St. Louis Cardinals 6-1 at Fenway Park in the sixth and final game of the 2013 series. Reversing the memory of the Frazee years, the Red Sox had climbed from  the basement of the American League East to the World Championship in just one year. 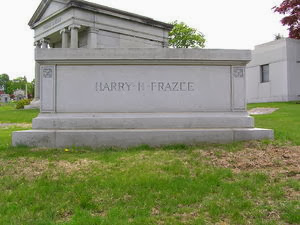 Subscribe to the Angel Investing News
Posted by George at 7:20 AM

Hello there, just became alert to your blog through Google, and found that
it's really informative. I'm going to watch out for brussels.
I will be grateful if you continue this in future. Lots of people will be benefited from your writing.
Cheers!