With limited partners continuing to reduce their investments in traditional VC funds, the large balance sheets of corporate investors are becoming increasingly important in the VC ecosystem. In Q3, CVCs participated in deals that represented just under 30% of overall VC funding. And while corporate VCs typically invest in later stage deals, many of them have worked with angel groups in the past.

Of the most active CVCs shown in the chart below, our local group, the eCoast Angels, has invested alongside Intel Capital and Motorola. James Geshwiler of the Common Angels says they have invested with several of these CVCs, Google Ventures and Intel Capital, as well as Salesforce and Autodesk. Chrstopher  Mirabile at Launchpad Venture Group cites Google Ventures and Intel (and perhaps In-Q-Tel  in the past).

Some highlights from the report.

Google Ventures tops the list of most active CVC investors in U.S.-based companies in Q3’13, followed by Intel Capital, Samsung Ventures and SAP Ventures. Only two healthcare CVCs, Johnson & Johnson Development Corp. and GlaxoSmithKline’s SR One were among the top 10 most active.

The average deal size with CVC participation rose yet again in Q3’13 to hit $17.0M on average. The deal size gap versus overall VC averages in Q3’13 was the widest in five quarters, highlighting the concentration of CVC funding at the mid and later stages and strong balance sheets of corporate venture investors.

The most active CVCs in Q3 have also recorded the most exits (M&A and IPO) in the first three quarters of 2013. Intel Capital leads CVCs based on total exits by U.S.-based portfolio companies, followed by Google Ventures and a three-way tie for the #3 spot between SAP Ventures, Samsung Ventures and Mitsui Ventures.

The top 3 mobile & telecom CVC deals took 70% of Q3 mobile CVC funding, which more than doubled Q2’13’s funding amount and marked the highest quarterly total since the start of 2012. On a year-over-year and sequential basis, mobile CVC deals increased 68% and 39%, respectively.

CVC investment in healthcare hit a five quarter low in Q3’13. Compared to Q2’13, deals and funding in the quarter declined by 41% and 27% respectively. Deals and funding were also down on a YoY basis.

Clean Tech saw under 10 deals with participation from Corporate VCs for the third quarter in a row. Funding levels were anemic in Q3’13, dropping below $100M for the second time in five quarters.

For the first time since Q2’12, California saw CVC funding cross the $1B mark behind a surge in mobile funding.

Many of the observations above are illustrated in the published report, which contains more than 50 pages of geographic, industry and funding round stage breakdowns. 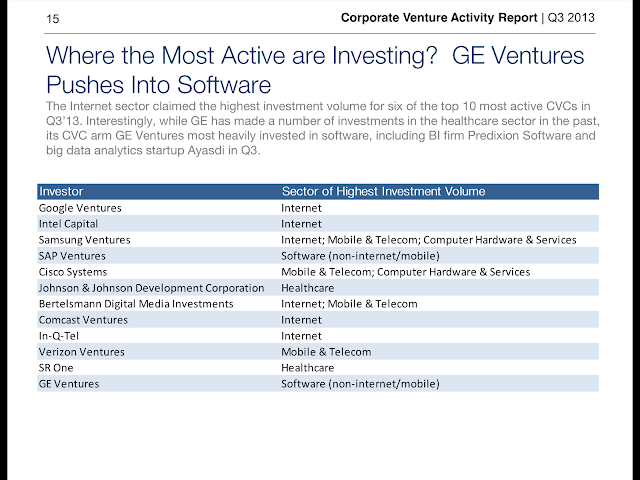